Mars is one of our neighboring planets, and it’s a planet of stark contrasts. Mars features deep canyons, enormous volcanoes, and craters that may or may not host water. It’ll undoubtedly be an intriguing location for future tourists to explore once Earth’s first Martian colonies are put into motion.

Future human-crewed missions into the red planet will involve landing sites in flat plains for safety reasons. It’ll certainly be helpful to land in a spot that’s only a few days’ drive from the planet’s interesting geological locations. One can only imagine how it would feel like to book a one-way ticket into these Martian locations in the future. Our credit card bill will definitely be filled with several trips into these Martian tourist attractions!
Olympus Mons
If there’s any place that’s on the top of our list in must-visit Martian sites, it’s undoubtedly the Olympus Mons. It doesn’t get as extreme as the Olympus Mons as it’s the most extreme volcano in the entire solar system.

It sits comfortably in the Tharsis volcanic region, and it’s as big as the state of Arizona! It also has a height of 25 kilometers, making it three times the height of Mount Everest.
Future financial advisors would definitely be intrigued once they see a one-way ticket in their client’s travel itinerary into Olympus Mons. It’s best to wait and see what the first explorers will find out about this massive volcano in the future. Nonetheless, it’ll certainly be an extreme volcano to try and peak, given its sheer size!

Valles Marineris
Move over Texas; everything is also incredibly big on Mars! Mars does not just host the largest volcano in the entire solar system but also the largest canyon. This canyon is promptly named Valles Marineris, and it spans around 3,000 km long! With this fact, that’s almost four times longer than Earth’s Grand Canyon, which measures only 800 km.
One can only imagine the degree of difficulty that the first Martian explorers will experience while exploring Valles Marineris. It’ll certainly be a difficult task but one that will surely enhance our knowledge of our neighboring planet.

Medusae Fossae
UFO fans may be familiar with the Medusae Fossae location on Mars. It’s one of the weirdest locations on the red planet, and some people theorize that it holds evidence of an alleged UFO crash. The best explanation for Medusae Fossae is that it’s most likely to be a vast volcanic deposit. It’s so huge that it measures one-fifth of the size of the entire United States!
Considering that it’s incredibly massive, future mortgage rates on this Martian location should be at a surplus as there seems to be a ton of space for everybody! 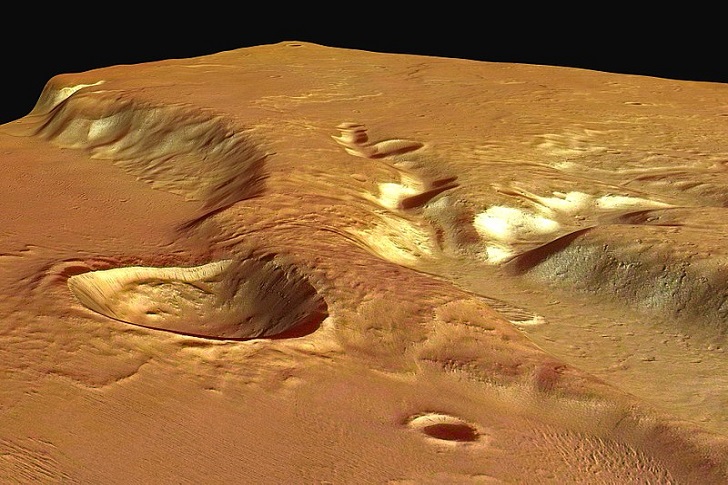 The Martian North & South Poles
Like any other planet, Mars’ north and south poles are incredibly interesting. However, we suggest that future tourists re-think their plans of booking a one-way ticket into the Martian poles using their credit card. Both Martian poles are icy regions. Unless you’re a big fan of ice and extreme weather, it’s a wise decision to stay away from this location.
According to a recent study by the Phoenix Lander, temperatures in the south and north poles of Mars are so frigid that carbon dioxide would condense out of the Martian atmosphere and into the ice on the surface. So, it’ll be an excellent decision to re-think your planned vacation into the Martian poles.

Mount Sharp & Gale Crater
As we said, Mars does not seem to run out of interesting geological features. Mount Sharp and the Gale Crater are two geological locations that have been made famous by the Curiosity rover back in 2012. Without a doubt, the Curiosity rover is an excellent investment that enabled us to peek into this fascinating Martian landscape.
Interestingly, there’s evidence that the Gale Crater used to hold extensive amounts of water. The Curiosity rover stumbled upon a streambed in just weeks after landing on the Martian surface. It also found evidence of water throughout its extensive exploration of the crater floor.

The Curiosity rover is now summiting Mount Sharp, a nearby volcano. The region brought a ton of new learnings for humankind as the rover was able to discover complex organic molecules on multiple occasions. Explorations of the region are ongoing to this day, and it may contain potential evidence of signs of life outside of Earth.
The Thatrsis Volcanoes
The Tharsis volcanic region might be a popular destination for future Martian tourists and explorers. The Tharsis region features 12 massive volcanoes that are all concentrated in a 4,000 km radius. These volcanoes share a similarity with the Olympus Mons as these volcanoes are much larger than what we have on Earth.